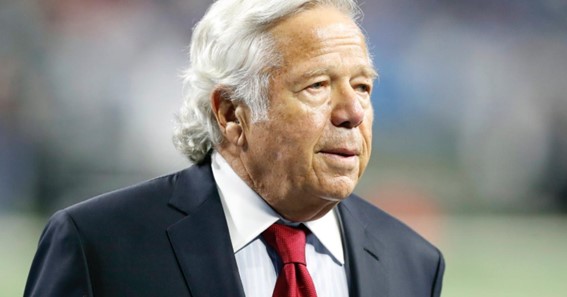 New England Patriots Owner Robert Kraft is the recipient of the Sports Business Journal 2022 Lifetime Achievement Award, and he indeed has accomplished much in sports. Not all of Kraft’s accomplishments lie in team records and trophies, however. His achievements also include many meaningful relationships that he’s developed.

Even with all of his success, Robert Kraft remembers the importance of family. Caring for one’s family was instilled in Kraft at a young age. He’s carried this value on throughout adulthood, teaching his sons the same lessons he learned about caring for loved ones.

Robert Kraft is in regular communication with his sons, discussing both professional and personal topics.

Robert Kraft gets to know the players who are on his sports teams, which include both the NFL New England Patriots and the MLS New England Revolution. He understandably develops especially significant relationships with the franchise stars, such as the quarterbacks of the Patriots.

Kraft, Patriots Quarterback Tom Brady and Patriots Coach Bill Belichick collaborated for years, and successfully so considering the team won six Super Bowls during Brady’s tenure. Kraft and Belichick also worked closely with Drew Bledsoe, who was the starting quarterback until an injury forced him to yield the job to Tom Brady.

More Than Football With Drew Bledsoe

During his time as the starting quarterback, Drew Bledsoe and Robert Kraft established a strong foundation between them. They would need that foundation after Bledsoe’s devastating injury, which forced Kraft and the front office to make difficult personnel decisions. Although Bledsoe departed from the team during the offseason, he and Kraft didn’t merely have a cordial relationship but were still friends.

Moreover, the friendship between Bledsoe and Kraft went beyond the gridiron. Bledsoe has enjoyed a successful business career after retiring from football, and his second career has included both starting up and growing businesses.

In this work, Bledsoe attributes much of the knowledge that has helped him be successful to Kraft. Kraft taught Bledsoe lessons in the office, such as to always compete for your company, and to always treat employees well.

Robert Kraft has met many musicians, including the rapper Meek Mill. One encounter with Jon Bon Jovi is illustrative of how quickly Kraft can go beyond mere surface-level conversation.

Kraft and Bon Jovi initially met each other after a game during the 2017 playoffs, and Bon Jovi then joined a group at Kraft’s house one evening. Reflecting on this evening, Bon Jovi said that “RKK’s curiosity, open mindedness and joy” were inspirational for him.

Along with the deeper connections that Kraft has made, he’s also certainly enjoyed many high-profile meets and greets with some of the world’s most famous people.

A quick scan of Kraft’s Gillette Stadium office wall show pictures with no less than seven presidents. These include most of the recent presidents. Portraits with Donald Trump, Barak Obama, George H.W. Bush, Bill Clinton, George W. Bush. Ronald Raegan and General Ford are all displayed,

Other meets and greets that are pictured include ones with Robert Smith (a wealthy investor) Michael Rubin (Fanatics CEO) and the Dalai Lama. The Dalai Lama is humorously wearing a Patriots hat in the photograph, showing a relatable and humorous side that’s not often seen in public.

Kraft regularly has a pile of similar meet-and-greet photographs stacked up that will soon be displayed.

In recognition of all that Kraft has done for and through sports, the Sports Business Journal has recognized Robert Kraft with its Lifetime Achievement Award. Kraft joins the likes of Peter Ueberroth, Billie Jean King, Paul Tagliabue, Dan Rooney and other well-known sports figures.

The award is one of the most prestigious sports and athletics awards given to non-athletes, or at least influential sports figures who have had major accomplishments off the field and court.

Kraft’s most obvious accomplishments are the Super Bowls that his Patriots have won, but the soccer team has also performed well. The most important accomplishments, however, may be the connections he’s made both inside and outside of sports. These connections have allowed Kraft to have an influence beyond the sport, and that influence will last far beyond his lifetime.

Kraft is now over 80 years old, yet he continues to be heavily involved with both of his sports teams. He also continues to converse with old friends and meet new people. Read this article for more information about Robert Kraft.

How To Keep Yourself Healthy For Active Participation In Sports?